A while back we put together a whitepaper documenting the design process of Sle, Adam Miklosi’s designer sled model and the prototyping concepts behind it. This time around, we dove into a new project, Boomerang, and the process behind designing it. Read on to learn about how Adam and Kristof Koczka finessed a mass consumer-oriented product - from idea to validation to production.

A fun fact, and what we love about this story, is the homegrown twist to the whole thing. Boomerang is a Hungarian product, designed on software developed by Hungarians, and manufactured by a local production facility.

Robert Labodi had a mold injection production facility on his hands, that was usually engineered to create car parts. But he was inspired to retool the company after a life-altering family event, to locally produce a design cup that would permanently replace disposable cups in cafes.

The mission was to create a completely full-circle production and consumption process. All of the cups are manufactured locally in Robi’s facility in Hungary. Deposit cups can be purchased at participating cafes, where coffee drinkers can exchange them the next time around for a fresh cup. If they leave, or want to return their cup, they get a portion of their cup cost back. The finished cups are then returned to be recycled in the manufacturing facility.

Boomerang got together with the designers to create the design for the cup. Here’s how the design journey went down.

The brief that the design team got, catered to the cup’s mission. The Boomerang team wanted to make sure that the final cup could be made out of one material (polypropylene) for full recyclability, be sealable, and also stackable to eliminate the need for paper trays. 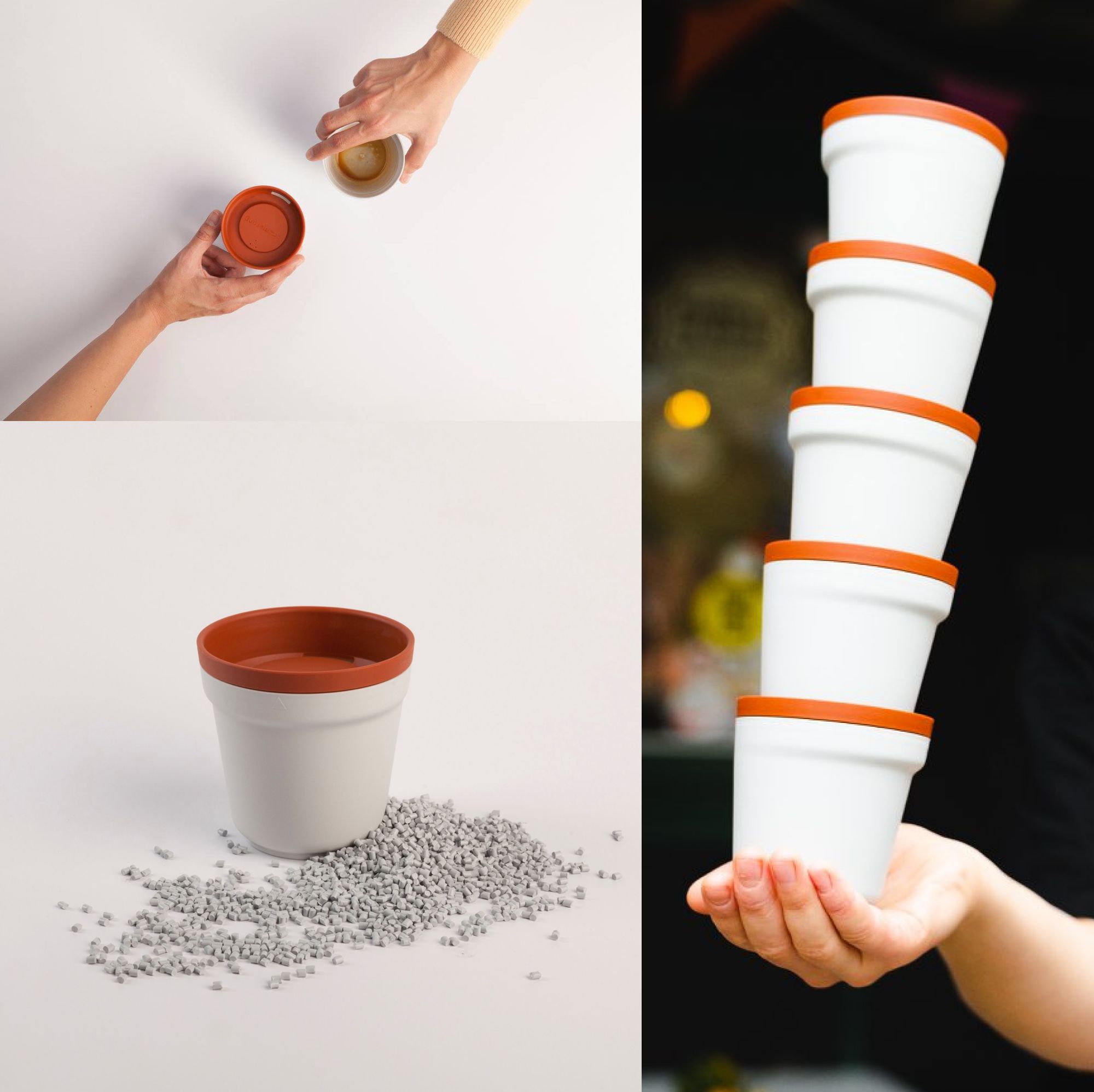 After a short user focus group, they gathered together all of the feedback people had -- about the taste of paper they disliked in cups to confusion around how to recycle them, and turned it into a product brief.

First things first, the design team did some competitive research. They looked at Keep cups, Huskee cups and ordinary disposable cups from different places to compare and contrast features. None of them met the mark on exactly what boomerang wanted, so they took learnings from what was wrong and what was right and moved forward. 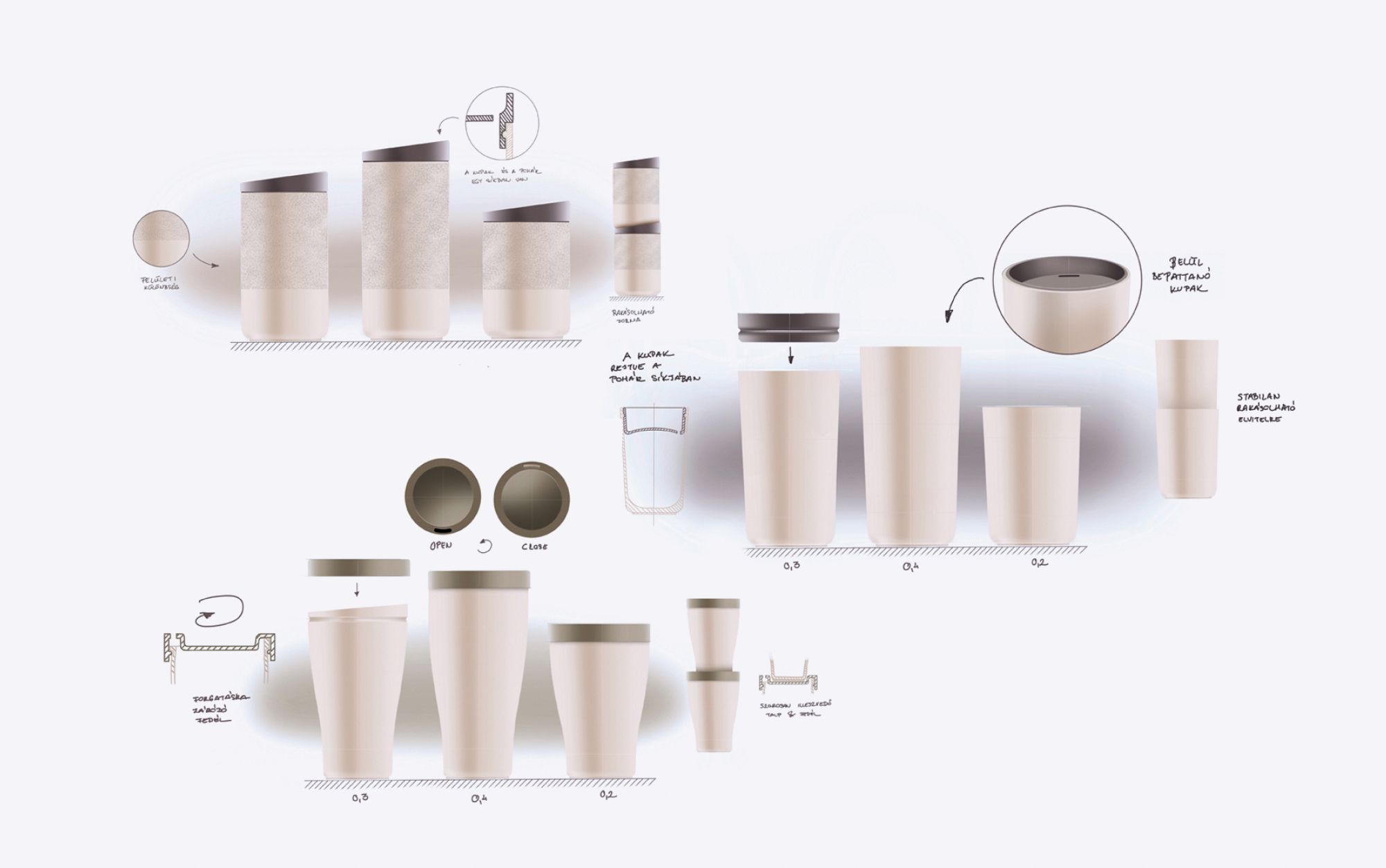 The first concepts were sketched in Procreate. At this point, the concepts were design ideas, and the team gave their feedback on the shapes that resonated the most. They chose features they liked from each piece and lego’d them together into one final whole.

Next up, the Boomerang team finalized the volumes and measurements for the product. At this point, Adam and Kristof moved from Procreate to Shapr3D, designing a 3D concept model on the app.

With a low time investment, they were able to visualize the cup for the Boomerang team and present it to them in 3D during the client meeting. For even greater value, Kristof and Adam were able to incorporate the team’s feedback on the spot, adjusting the model in real time to explore new shapes and features on the spot.

We had a lot of success adjusting the product concepts with the Boomerang team in real time using Shapr3D, the app really propelled a valuable co-creation process. - Adam Miklosi

Once the final model was confirmed, the time came to validate the design and user test. Designs can often look different on the screen versus in real life, so it’s important to hold a tangible model to validate dimensions and the overall look. Prototypes were 3D printed to see the cup in real life and even showcase it to cafes to measure their reaction.

The shape and concept were down, and it was time to add the final touches.

The hole on the lid was adjusted and three small holes were added so that it could be poked onto the fork of a washing machine and any remaining water would drip out of the bottom. This prevents the lid from smelling bad and ruining the coffee drinking experience. A notch was added to the cup’s ring on the bottom for similar reasons.

The cup and lid pairing is sealable through an ingenious use of negative space. The lid can be twisted over the asymmetric lip at the top of the cup to keep drops from flowing out. In addition, the lid was also angled so that any coffee drops that escaped during a bumpy ride or brisk walk flow back down into the cup.

The middle point of the lid still matched with the middle point of the cup, so that 5-6  cups would be stackable without losing their character or taking up too much space. The team was able to test this in Shapr3D by simply placing multiple duplicated models on top of each other within the workspace.