Building a movement for electric vehicles

The Jaunt Motors team is on a mission to make electric vehicles (EVs) a mainstream form of transportation in Australia. To reach their goal, the team has to get locals to purchase and drive more EVs and municipalities to establish more charging points. Their solution got more than a little creative.

Dave Budge, his business partner Marteen Burger, and their team of seven designers and engineers, are taking an iconic fixture of the Australian landscape - Land Rover 4x4s - and turning them into a movement for change. For the past two years, Jaunt has been working on a process to repurpose these four-wheel drives into EVs to create a fun, classic, and eco-friendly driving experience for visitors and locals.

In the ‘60s and ‘70s, Land Rovers were the most popular four-wheel drive you could buy in the British Commonwealth. Just about every farm and government department in the country had one -- about half of the Land Rovers made across the span of those two decades were purchased by Australians.

Still today, Australians buy more four-wheel drives than any other car, purchasing more of them annually than drivers in the United States. But there are no SUVs available as EVs. So David and Marteen sat down and designed a plan to turn social change into a business.

Because the iconic shape and essence of the car have become so ingrained into Australian culture, it’s the perfect “vehicle” for creating an EV that feels like it belongs. The team thus challenged itself to create an eco-friendly car rental experience that exchanged the standard (embarrassingly out of place) Hertz-branded Toyota rentals with a classic vehicle updated with modern, user-friendly design and batteries.

Jaunt is finishing up the first prototypes and producing its first five finished vehicles this year. Moving forward, they’re already booked out for all of next year, which will include refurbishing another 15 cars. As they scale production, they’re working on creating repeatable manufacturing processes to accelerate vehicle improvements.

What it takes to recreate a classic

Dave and Marteen come from backgrounds in digital design and production management. They’ve worked together on and off for 12 years, in different fields of emerging technology. Their shared focus is always on implementing innovation in beautiful, fun, and useful applications.

Jaunt Motors co-founders Dave and Marteen in the shop

Their latest collaboration is Jaunt Motors. They were inspired by the already 15-year history of electric vehicle conversions and the ready availability of plug and play parts.

“It’s kind of like building a PC. There are some tricky bits, but all the parts are designed to plug together. So the challenge is really fitting batteries and everything into an old car, not making the technology work.”

Dave and Marteen looked at current EV conversions and found that what was missing was the emphasis on user experience. So they thought about how to integrate EVs from a design perspective as well as a technological perspective.

How does a good UX manifest in a 1960s Land Rover, for example? A lot of the dials and gauges in the original dashboards have become unnecessary fluff.

With this focus on design, the team didn't just redesign the batteries, battery boxes, systems and brackets -- they also reimagined the entire dashboard and cabin of what was once a pretty basic car.

Original Land Rovers didn’t have any heaters or even radios up until the 80’s -- “luxuries” that Budge’s team has worked on including for their clients. 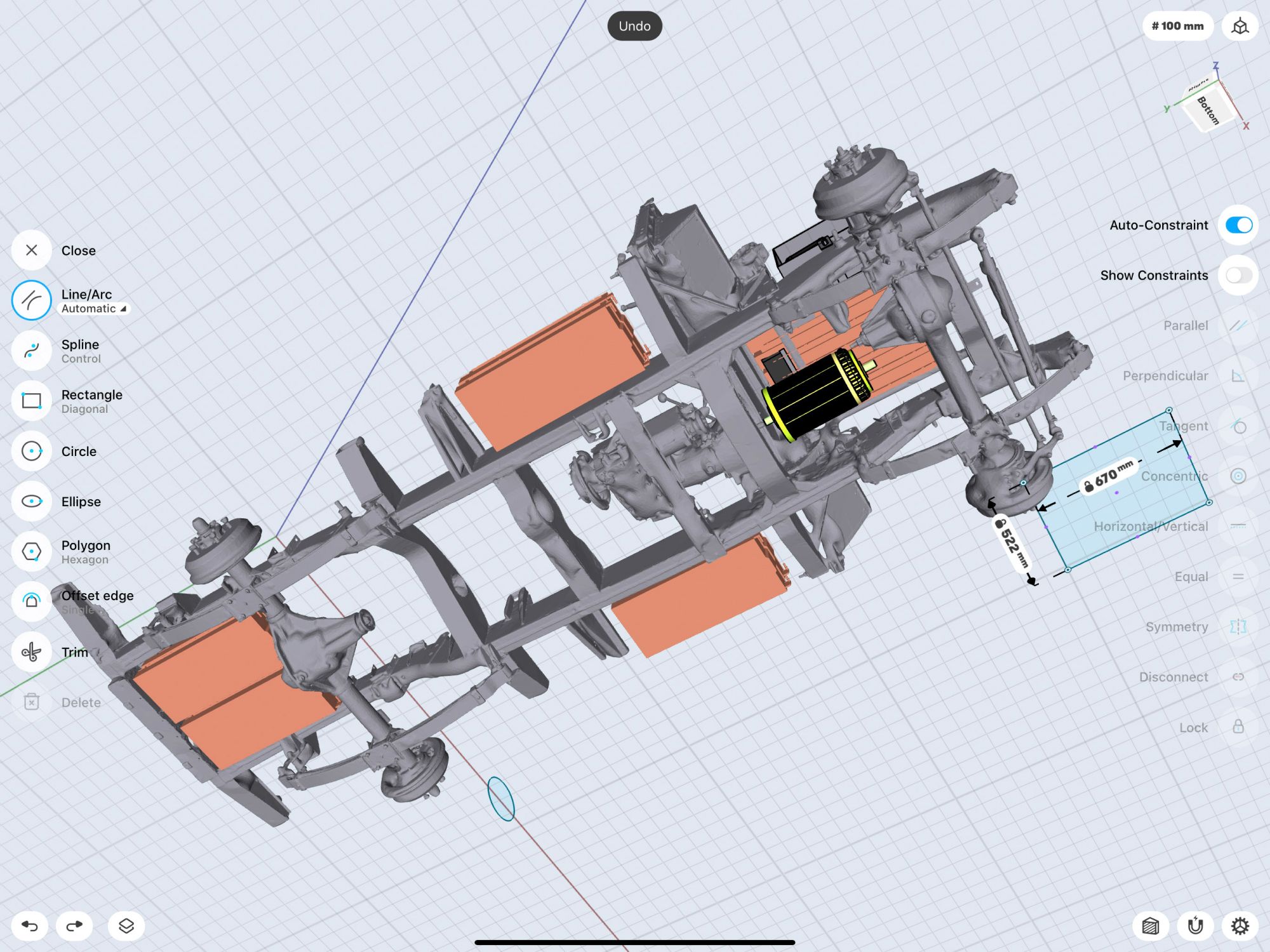 Because of their focus on custom design and craftsmanship, the Jaunt team is made up of people who have apprenticed as boat builders, drift car builders, and even elevator electricians -- a field interestingly, but unsurprisingly, invested in understanding how to move humans from one point to another in a certain way.

Meanwhile, Australia’s love of four-wheel drives means there are plenty of fabrication facilities, and the team can work with them to prototype gear, as well as create their own 3D printed, milled and laser-cut prototypes at a local maker space.

Dave’s team is up against no small challenge. They’re taking an old car that’s hand-built with limited precision and connecting it to precision CNC and laser cart processing. The placement of old parts on the car are so unpredictable, that finding the bolt holes between the chassis and body can already become a practice in drilling. 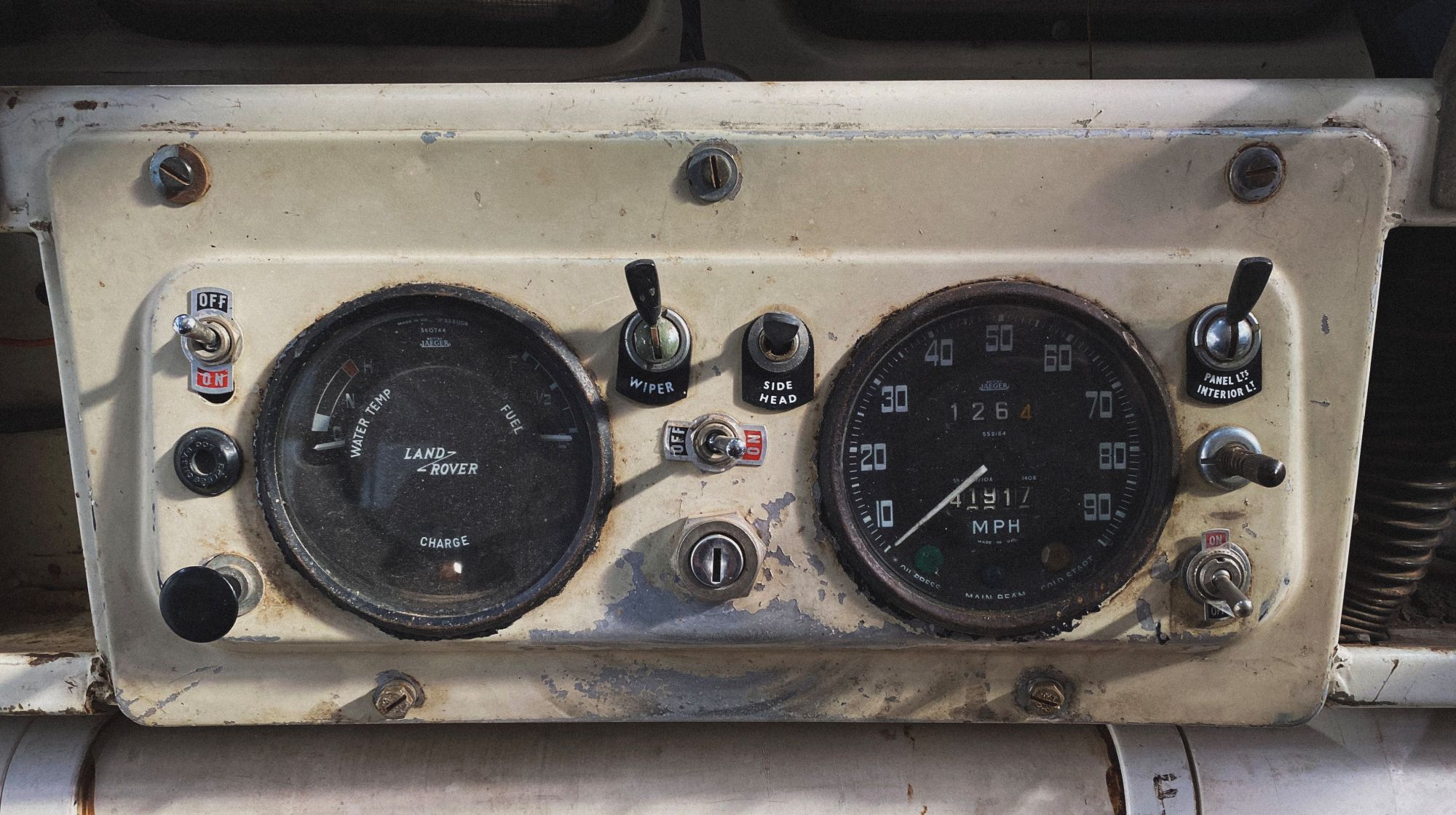 To solve design challenges, the team uses a combination of force and wit. Hammering things until they fall into place can at times become a necessity, but for parts that can be replaced, they’ve begun using Shapr3D as a concept design and CAD tool to create custom parts in the workshop.

Whether they're prototyping parts themselves by CNC milling plywood pieces or getting the finals fabricated by a production partner, each step is designed to move the process from one-off, hand-built parts to repeatable designs that can work across over 40 years of Land Rover designs. 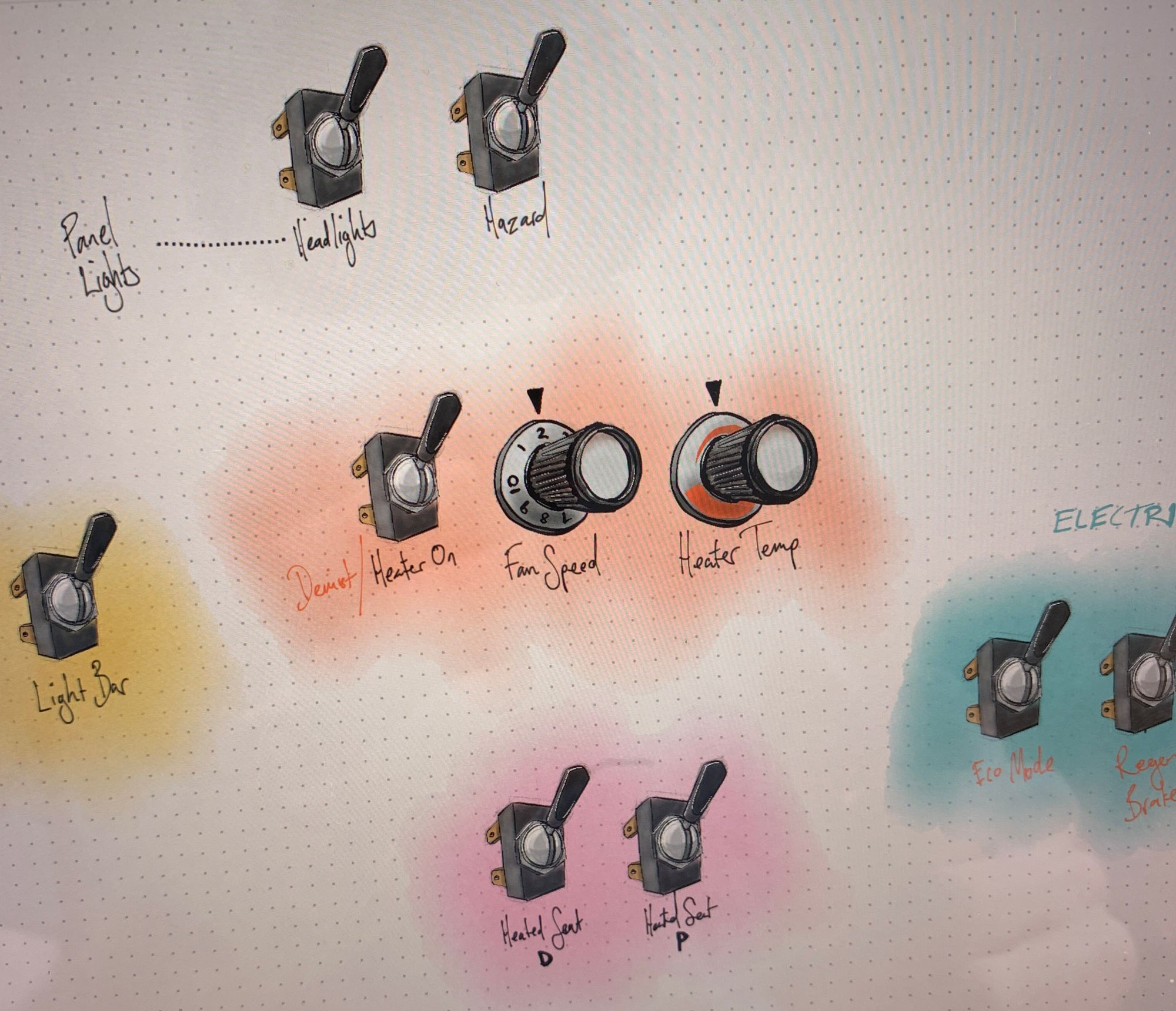 Many of the models from the ‘60s and ‘70s don’t have working CAD files, so they work with a team that 3D scans the vehicle bodies, then import them into Shapr3D and work in the electric batteries and fixtures to show customers what the end result will look like. 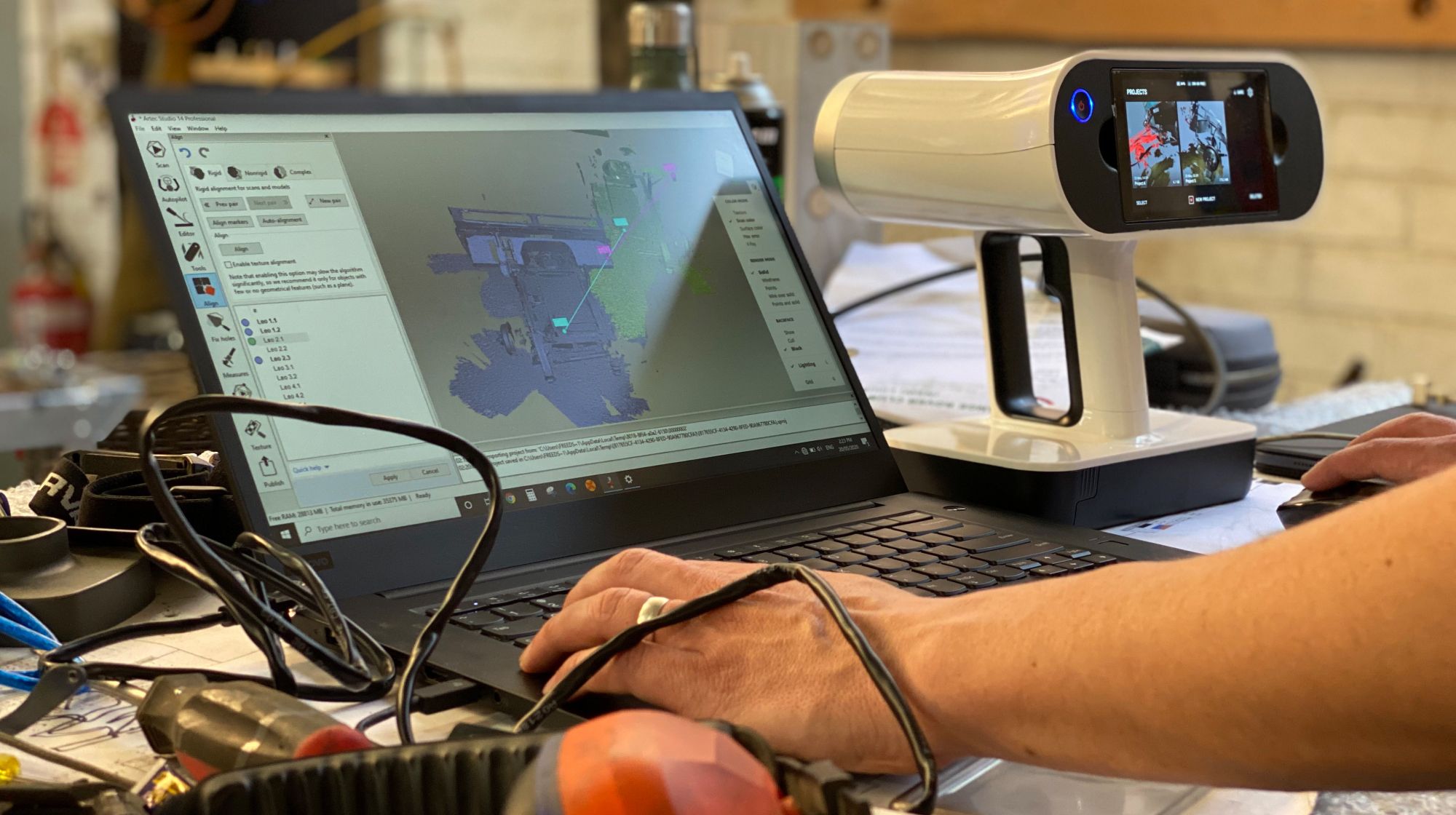 The dashboards on the really old pre-1970 Land Rovers were largely big hunks of metal with gauges and ignition in the center. The interior design itself is really simple, basically just the other side of the sheet metal exterior. 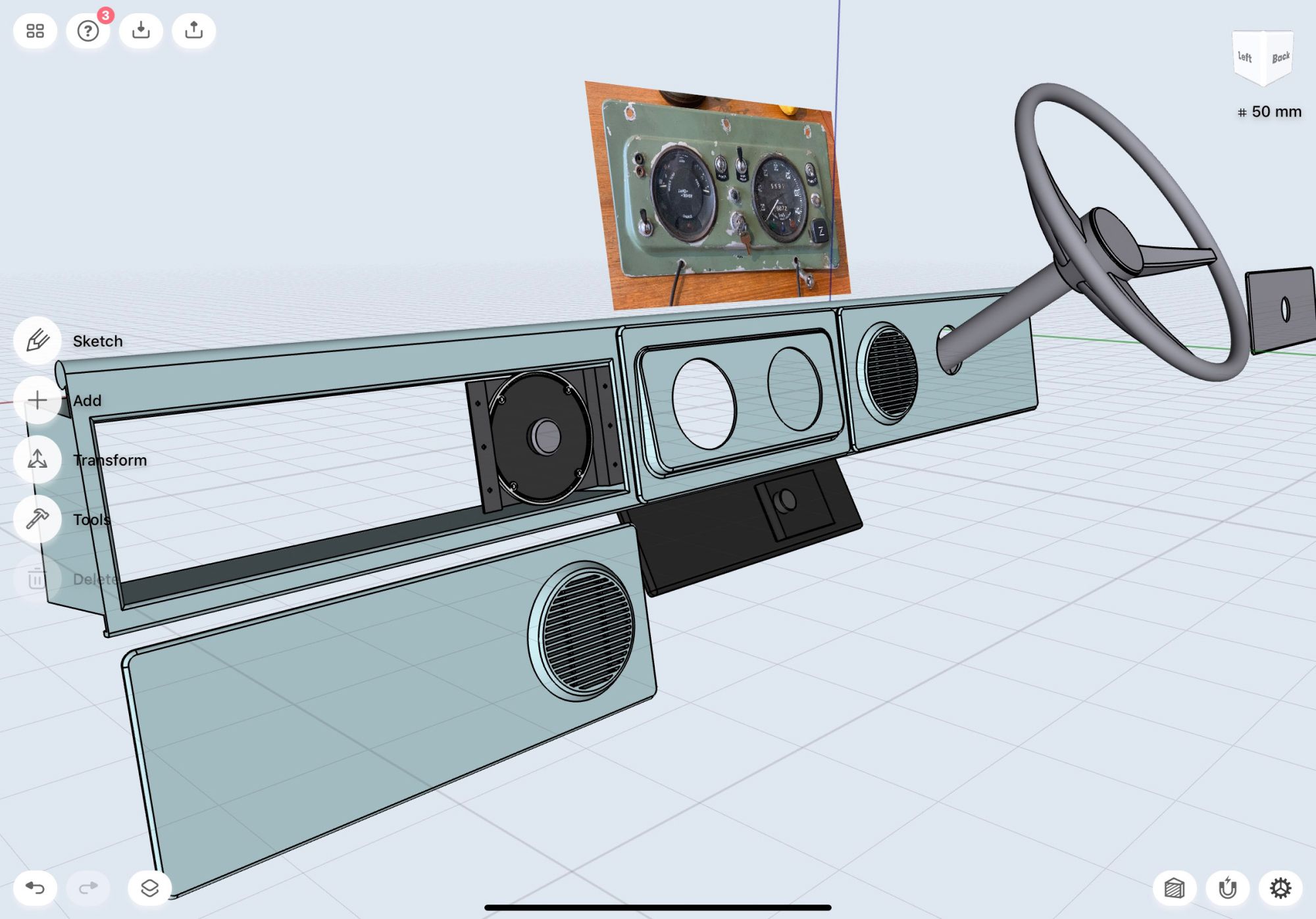 3D model of a Land Rover dashboard in Shapr3D

The design language of the car itself is strange, the way that the functions are described aren’t the most friendly. Many of the classic rigs don’t have symbols, just text, or unlabeled switches that drivers ‘know’ how to work.  Between the mystery handling and the novelty of electric vehicles, the team had to work hard to make the whole ride more approachable.

“We didn’t want something that just took some elements from the classic car, this texture or color or material, and otherwise totally changes the vehicle. We want to make a design statement. I get this feedback now, which is great, that people don’t notice that it’s not the original thing.”

Throughout the process they asked themselves -- what would the original designers and engineers at Land Rover have done? When you’re renting a car, how few screens can you include to provide enough information while keeping it easy to handle? After all, the goal of Jaunt is to make it fun and authentic to look out the window at the beach or the Bush in an Australian classic.

With this philosophy in mind, Dave goes into the Concepts app to create initial sketches and brainstorm. He likes the ability to compile references and look at things in a big picture way in the app. After some thoughts are sketched, he’ll move into Shapr3D.

“I want to see in 3D, very quickly. You can sketch out all you want, but when you’re going into physical manufacturing, you can approximately draw a three mm gap in the context of a five mm thick aluminum, but it still won’t click. So getting into 3D very quickly was the goal.”

Another perk of working in Shapr3D? The joy of design.

“It’s very fun and easy to jump in and create some simple shapes that give you that dimensional sense of things. I’d work in the factory all day and then come home and do the design. The fact that I could sit on the couch and design was what made it happen, because it didn’t feel like I had to carve out time at a desktop to think about numbers and parameters in Fusion or Rhino. Direct modeling felt more like a continuation of working in the workshop in that sense.”

In the dashboard, there were elements that were CNC milled out of thick aluminum stock while other elements were out of sheet metal. Dave exported those as models and pull them into Fusion. The thicker machine plate directly translated, but the sheet metal components he redraws in Fusion where the sheet metal tool is easy to use and he can export 2D drawings.

The companies they work with to get things machined use AutoCAD, so Dave exports Shapr3D files, create drawings out of them in Fusion, and sends them to the manufacturers as PDFs. With their own CNC mill, they often export directly from Shapr3D to cut parts before sending them to the workshop.

“We’re a small team and startup which comes with all sorts of pressures. Having something that’s more fun is huge. But the other thing - because obviously we don’t want to compromise the design for fun - is that it’s a lot faster to get that shape and feel. You can come at it both ways. In Fusion, it wants you to be perfect and get all the parametric details and stuff. But I like to design the theme and then shape it -- I find it’s very quick for me to get an idea of what I’m building and what I’m designing and then work backward and figure that out.”

The parts that are laser cut are drawn in Shapr3D as well, as the team likes the 2D CAD features of the app. They’ll sketch in Shapr3D, export to DXF and open the files in the laser cutting and control software. When they’re not actively working on the files, they’ll use the models as a reference.

Dave Budge and a teammate refurbishing Land Rovers in the workshop

The team is aiming to get a 1:1 3D model of the vehicles they build, so all of the components and new parts have 3D models as well that are continuously updated. They use Shapr3D to do that, updating models on the factory floor every day.

Ready for a ride in the breathtaking countryside of Australia? Check out Jaunt Motors on their website and Instagram.